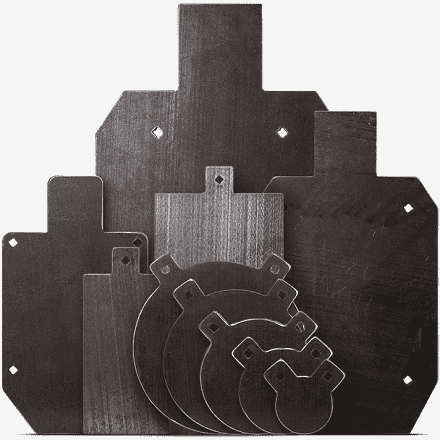 STAGE #2: Shuffle the Deck – Unlimited round count – 15-yard line – The shooter starts with their back turned away from the 5 plate “deck of cards” steel target. On the buzzer, the shooter turns and observes fours playing cards laid out on the table, 1 card from each suit (diamond, spade, heart, club). The shooter retrieves his fully loaded pistol from the table and must shoot one round to each corresponding steel plate in the order presented by the playing cards.  The shooter finishes the stage by shooting one round to the “Pot of Gold” plate in the center of the target stand.  The “Deck of Cards” steel target will be placed at the 15-yard line.  There will be a 2 second penalty for each miss and an additional 5 second penalty for shooting the targets out of order.

Total time for each stage will be added together for the shooters final “score.”  Lowest time wins.

STAGE #3: OPTIONAL:  Spin the Spinner! Want your penalties removed from your total score? You may choose to attempt a 30 second, unlimited round count at the spinning steel target. The spinner will be placed at the 12-yard line.  If you spin the spinner at least one time, all your penalty seconds from the first two stages will be removed.  What if you ran both stages with NO penalties? You can still test your luck on the spinner and if you succeed, 5 seconds will be removed from your total time on the first two stages.  ANY shooter attempting the spinner challenger that FAILS to completely spin the spinner one time, WILL have 5 seconds added heir total time from the previous two stages.